West Sweden has a vibrant design scene characterized by the region’s nearness to nature. This is reflected in the materials and the designers’ focus on sustainability, whether they’re working with ceramics, wood or denim.

“It’s always difficult to pinpoint what is Swedish, what is typical for Gothenburg, and sometimes even what’s Nordic. The characteristics that are typical for Swedish design – honesty in materials and a combination of functionality and aesthetics – can be seen here, too,” says Anna Elzer Oscarson, chairman of the Swedish Society of Crafts and Design’s West Sweden branch, when asked to explain the typical characteristics of design in her home town Gothenburg on Sweden’s west coast.

“But what does affect design here is the underdog perspective; the fact that we’re not in the big city, yet not in the countryside either,” she adds. “Those things can be an advantage. There’s something liberating about not being in the middle of things. It makes you feel a bit like an outsider, which in its turn makes our designers strong and independent.”

Anna Elzer Oscarson runs her own award-winning brand, AEO, which specializes in utility goods such as handmade ceramics. She studied at HDK – Academy of Design and Crafts, University of Gothenburg – and has since lived and worked in Gothenburg. 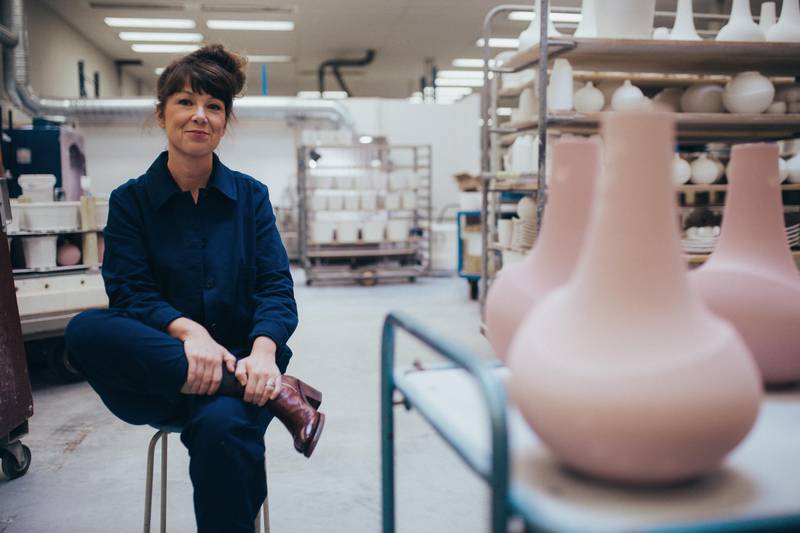 Her latest collection Dancing Dune, inspired by ripples on the water’s surface, was manufactured at Porslinsfabriken i Lidköping – one of Sweden’s few remaining porcelain factories located a 2-hour drive east from Gothenburg. The vases and dishes were created using a combination of 3D design and manual craft. She sculpted the forms in 3D, after which she collaborated with skilled craftsmen and women at Porslinsfabriken in developing the casting moulds and unique glazes.

Elzer Oscarson is one of the many interesting creatives working in West Sweden, a region which has produced a host of wayward designers and brands.

Famous names include Daniel Rybakken, whose limited-edition lamps and installations have won several prizes, and his equally award-winning furniture designer colleague Staffan Holm. The two also share a studio. Sami Kallio combines traditional carpentry and modern methods of industrial manufacturing in his work, while Emma von Brömssen creates patterns of plants and wildlife that grace crockery, wallpapers and textiles. Bolon, a family-run company whose versatile PVC-flooring can be found in places like Adidas’ headquarters in Shanghai and the Shoreline hotel in Waikiki, is another notable name. Fashion is big here too, with companies such as Nudie Jeans finding fans way beyond Sweden’s borders with their sustainably produced denim.

While they all have their unique style, Elzer Oscarson sees common denominators in their work.

“When you choose to live here, there’s something important in the surroundings you feel that you want to retain. Like the nature. You can see it in the design. There’s a strong natural feeling in it and the materials,” she says.

The design scene in the region is as vital as ever and the future looks promising, says Oscarson, with the many design schools operating here fostering a new generation of creatives.

“The Swedish School of Textiles in Borås is at the forefront of its fields, producing interesting fashion and textile designers, while HDK works in a multi-disciplinary way, even addressing the role of design in the society.”

1. Röhsska – The Museum of Design and Craft

“The museum has just undergone a major renovation. The East Asian exhibitions, for instance, have been transformed so that works from that region are showcased side by side with local designers who have been inspired by Asia.”  Röhsska will re-open after a renovation in 2019.

”Gothenburg has a very strong art and craft scene. In this gallery and store, you can buy high quality ceramics, glass and jewellery produced by the members of the Sintra cooperative, all of which come from West Sweden. You can also explore contemporary craft exhibitions.”

”The whole area surrounding this contemporary art museum is raw and interesting. See the exhibitions or just walk around and have a fika.”

”A collection of shops and a lovely museum which tells the story of the old Rörstrand porcelain factory and exhibits both showpieces and everyday porcelain from the 18th century until today. You can feel the history of Sweden’s porcelain manufacturing here, which has almost disappeared today. I work closely with the factory, where they produce my series Dancing Dune.”

”A beautiful and centrally located boutique with carefully selected fashion by Swedish and international designers, mixed with other objects such as AEO ceramics.”