Ask any Swede about Visby, Gotland and they’ll probably get a dreamy look on their face. It’s rare to find someone who isn’t fond of this enchanting medieval town, located on the island of Gotland, east of the Swedish mainland.
Last updated 07 December 2020

Whether you’re looking for history, nature, culture, good food or just want to relax on the beach, the town of Visby, on the island of Gotland, has it all. Located in the Baltic Sea, this fairy-tale town is a national treasure. It’s also a UNESCO World Heritage Site, characterised as having “outstanding universal value.”

This well-preserved medieval Hanseatic town dates back to the 12th century and contains a number of remarkable church ruins from the period such as the St Clemens, St Nicolai and Drottens ruins, or the St Karin church ruin with its high arches. Visby boasts a number of historic churches as well, including the Sankta Maria Cathedral built at the end of the 12th century.

Visby also has a well-preserved 3.5 kilometre long medieval ring wall with many of its original towers from the 1200s still intact. The wall encircles the centre of Visby and was originally built for protection against both foreign enemies and Swedish assailants from the countryside. 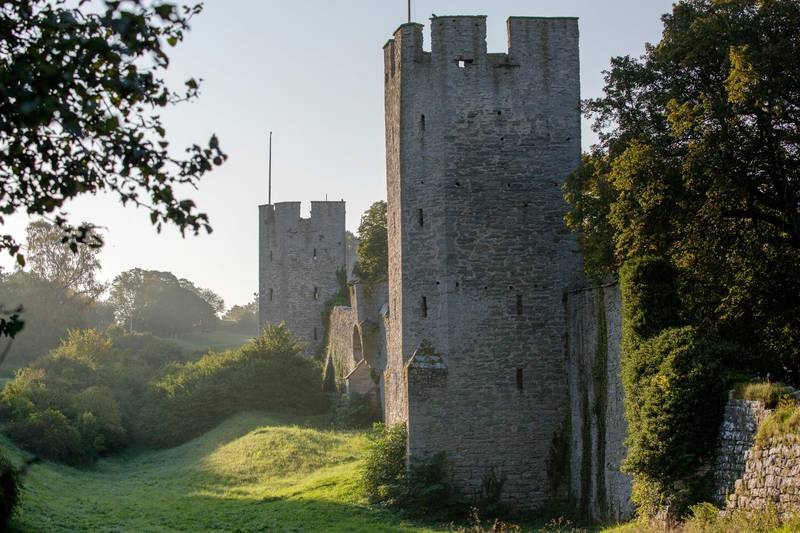 The city wall of Visby is a medieval defensive wall surrounding the Swedish town of Visby on the island of Gotland off the coast of southeast Sweden. With 3.4 of the original 3.6 kilometres of wall still standing, it is the best preserved city wall in Scandinavia. Photo: Emelie Asplund/imagebank.sweden.se

Along the streets of the town are more than 200 buildings and homes dating back to between the 12th and 14th centuries. The Gotland Museum’s Fornsalen (Hall of Antiquities) contains a number of archaeological finds dating back to Viking times. A visit here will help put the town’s long and fascinating history into perspective.

Every summer, Visby celebrates Medieval Week (Medeltidsveckan) with its lively market including music and theatre. All in all, there are some 500 events. It’s the biggest medieval festival in northern Europe and a lively event where people dress up in costumes and recreate life in medieval days. It’s a lively experience for visitors of all ages.

Gotland is an island in the Baltic Sea approximately 90 km off the eastern coast of Sweden. It has been inhabited for a long time, probably dating back to the Stone Age. Today there are more than 40,000 ancient sites to be found on Gotland, and the main town, Visby, with its medieval walls, has been named a UNESCO World Heritage Site.

In addition to its long history and fascinating ruins, Visby is also known for its gardens, and particularly, the profusion of roses that bloom in the sunny summer months. In addition to the roses and overflowing flower boxes on Visby’s winding, cobblestone lanes, there’s a collection of roses at the 2.5 hectare Botanical Garden, which dates back to 1855. It also has a large collection of exotic trees and plants that flourish in Gotland’s mild climate. There’s no entrance fee for the gardens, which also contain a herb garden and a Gazebo Garden (open-sided pavilion).

With its natural beauty and ancient history, Gotland is a mystical and inspiring place to live that attracts many artists. Their handicrafts are sold in the local Visby shops. Gotland is particularly known for its wonderful ceramics and woollen items. The grey, wool lambskins from local sheep, warm and decorate many Scandinavian homes. 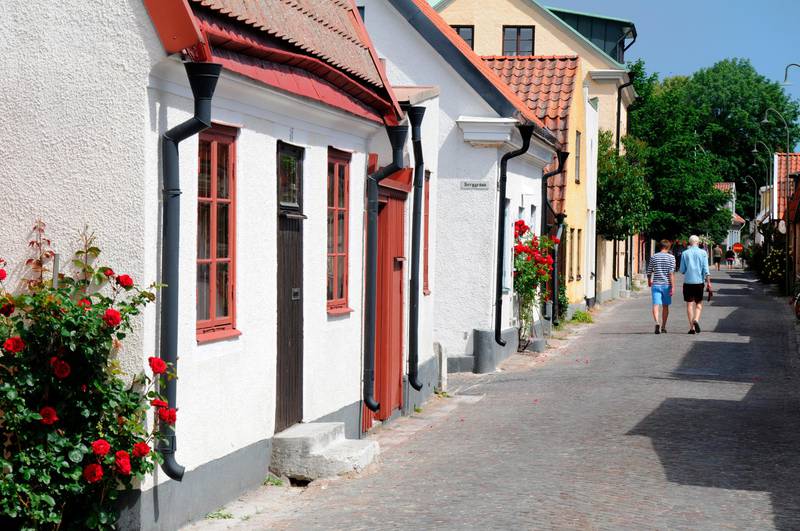 Gotland is an island in the Baltic Sea approximately 90 km off the eastern coast of Sweden. It has been inhabited for a long time, probably dating back to the Stone Age. Today there are more than 40,000 ancient sites to be found on Gotland, and the main town, Visby, with its medieval walls, has been named a UNESCO World Heritage Site. Photo: Rodrigo Rivas Ruiz/imagebank.sweden.se

PRACTICAL INFORMATION BEFORE YOUR TRIP TO VISBY

There are direct flights to Visby from Stockholm, Malmö and Göteborg year round. SAS offers flights to the Visby Airport, which is situated just a few kilometres outside the city wall. There are also frequent ferry services to the island. Ferries to Visby run throughout the year from Nynäshamn, Oskarshamn and Västervik. The journey with Destination Gotland takes about three hours and should be booked in advance, especially for the busy summer months.

The narrow streets of Visby are best explored by foot and it’s easy to get around in the city centre. There is also a public transport system consisting of Visby city lines as well as regional lines. You can purchase single tickets or 24- and 72-hour tickets. Bikes are another convenient way to move about and there are plenty of bike paths. There are several car rentals here too if you want to take yourself further afield.

Visby offers all kinds of accommodation, including affordable hostels, camping and self-catering accommodations, Bed and Breakfast and a range of budget to exclusive hotels, both within and outside Visby’s walls.

Visby has plenty of activities for people of all ages. Among its main attractions are the medieval city wall (Ringmuren) and the many remarkable church ruins including St Clemens, St Nicolai, Drottens and St Karin. There’s also the Sankta Maria Cathedral built at the end of the 12th century.

Stroll through the Botanical Gardens or go back to the Viking days at the Gotland Museum’s Fornsalen. Make sure you leave time to eat at the many excellent Visby restaurants, and shop for local Gotland crafts and delicacies to take home.

All ages will enjoy the Visby city wall and exploring the many towers and ruins of the city or spending time in parks and on beaches.

At the Gotland Museum’s Fornsalen children can see treasures from the Viking Age including medieval armour and skeletons or let loose in the museum’s playroom, which includes child-sized boats and a lighthouse.

Fans of Pippi Longstocking books and movies can travel a few kilometres south of Visby to Kneippbyn, a summer resort and water park with a Pippi theme.

From saffron pancakes to truffles

While Visby is at its liveliest in the spring and summer months, there is plenty to do at any time of the year, not least visiting its many excellent restaurants, bars and cosy cafés. As in the rest of Sweden, “fika” is a popular pastime. Gotland has its own brews of coffee and tea that are served with delicious homemade goods, such as the island’s traditional saffron pancake with berries and cream.

The lime-rich soil of Gotland and a favourable climate contribute to plenty of fresh, local produce. If you happen to be in Visby in the early spring, asparagus will be on the menu in all forms. 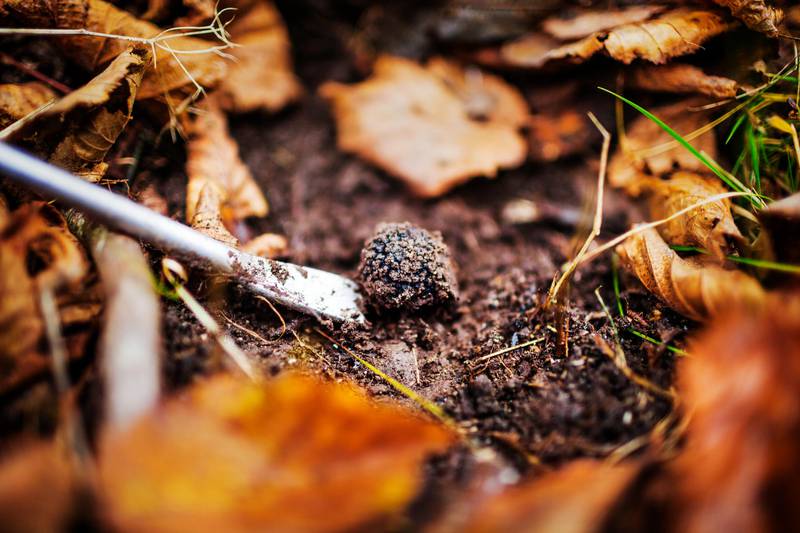 Truffle hunting is a popular activity at the Risung mansion on the island of Gotland in the Baltic Sea. Truffles are fungi that are highly prized as a food. Photo: Simon Paulin/imagebank.sweden.se

Truffles grow on the island as well and if you’re a fan, you won’t want to miss the late autumn months, when truffles appear on restaurant menus and in shops. If you happen to be on Gotland in November, there are also tastings, truffle hunts and lectures arranged by the island’s truffle academy.

An abundance of lamb on Gotland means you’ll find lamb dishes served in many restaurants, along with tasty local sausages, venison and more. Smoked salmon, flounder and herring are also popular. There are plenty of options for vegetarians and vegans too.

You might want to wash the food down with beers like Wisby Pils and Sleepy Bulldog from the local Visby brewery.

If you enjoy spicing up your own cooking, don’t miss Krusmyntagården, which has all kinds of spices and herbs, and beautifully packaged gifts to take home. Kränku Te & Kaffe sells tea, coffee and sweets in a charming, old-fashioned shop. Try their own tea blend called “Andre Kåppen” (Second Cup) the name hinting that you’ll want another cup. Lilla Bjers Gårdsbutik sells freshly harvested and ecologically grown farm goods as well as carefully selected ecological products like olive oil and chocolate.

With its 800 kilometres of coastline, Gotland offers plenty of picturesque spots for relaxing and bathing. There are four beaches within just five kilometres of central Visby and a beach promenade makes it easy to cycle there. If you feel like going a little further afield, head for the popular Tofta Beach, located 20 kilometres south of Visby. It is accessible by road or on a designated bike path.

Gotland has more than 100 nature reserves including Brucebo just north of Visby and Ekstakusten to the south. The island’s scenery ranges from dramatic rock formations and barren landscapes to lush vegetation and sunny meadows. And as always in Visby, there is the presence of the mesmerising sea.

Outdoor seating
During the Swedish spring and summer, people tend to be outdoors as much as possible. That includes eating and drinking. So restaurants open up whatever space they have outside to their guests.
Photo: Simon Paulin/imagebank.sweden.se

Swedish political parties, journalists, influential people and mere mortals gather in Visby to discuss politics and attend seminars, speeches and other political activities as well as some festive events. The Almedalen Week is always carried out in week 27.

Visby city wall
The city wall of Visby is a medieval defensive wall surrounding the Swedish town of Visby on the island of Gotland off the coast of southeast Sweden. With 3.4 of the original 3.6 kilometres of wall still standing, it is the best preserved city wall in Scandinavia.
Photo: Emelie Asplund/imagebank.sweden.se

Every year in week 32, the Middle Ages return to Gotland and the once powerful Hanseatic city of Visby. Up to 40.000 visitors celebrates the festival Medeltidsveckan with theatre, markets, crafts, tower games, music performances, lectures and other events.

The regional flavours of Sweden