As a Scandinavian country with four distinct seasons, Sweden’s food culture has been shaped by its climate. The frost free season – between May and August – was historically geared towards producing what could be stored through the winter months. However, southern regions enjoy twice as long a season due to milder temperatures.

Food preservation was practiced in Sweden as early as the Viking times. Richer households used methods such as salting and smoking, while the less wealthy would typically opt to dry, ferment or pickle their fish and produce. Pickled and fermented foods remain a part of the Swedish diet even to this day, and popular variants are cucumber, cabbage and other vegetables and root vegetables. The pickled herring (sill) is a staple for the national holidays of Easter, Midsummer and Christmas.

Porridge and bread have also been staples for over a millennium. The population relied on water mills, whose wheels only turned twice a year, and the bread therefore had to last for a long period of time. Hence the rise of crisp bread (knäckebröd) that could be stored until the next production. In the south, where windmills were used, baking was done more frequently, giving southerners access to softer bread.

Protein sources of yesteryear were milk, cheese, pork, fish and game such as elk. Reindeer meat was, and still is, mostly eaten in northern Sweden as part of the Sami culinary tradition.

The main vegetables grown in the past were onions, turnips and swedes (rutabaga) – root vegetables grew well in the Swedish climate and were also key due to their keeping for a long time. Around 1720, the potato entered the Swedish culinary scene, gradually replacing the root vegetable as the most important base produce. It has remained an important part of the Swedish diet, often eaten boiled or mashed. The arrival of new potatoes (färskpotatis) is the start of summer in Sweden.

The international influences behind Swedish cuisine

Sweden’s food culture centres on local produce, but many classic dishes have international roots. This is because Swedes have always had a mentality of exploring and trying new flavours and dishes and incorporating them with local ingredients, making for new gastronomical experiences.

As early as the 17th century, French influences started creeping into Swedish cuisine, giving rise to the rich, creamy sauces loved by Swedes still today. And perhaps the most well-known national dish, meatballs, was brought over from Turkey by King Charles XII in the early 18th century. To make the meal their own, Swede’s complement the meatballs with local trimmings such as pickled cucumber, potatoes and lingonberries, smothering them in a creamy gravy (brunsås). This dish is now known around the world as “Swedish meatballs”.

Other global specialties – lasagne from Italy and Turkish kebabs included – have also added to Sweden’s culinary spectrum. Kebab pizza and pizza topped with beef filet and béarnaise sauce are nationwide favourites that combine a culture clash of foreign ingredients to create dishes that have become new Swedish classics. A family favourite on Fridays is the Swedish taco, definitely inspired by the Mexican kitchen but made something unique and truly Swedish.

With Sweden’s strong history in trading, exotic spices such as cinnamon, cardamom, anise and saffron found their way into popular Swedish baked goods like the ginger bread cookies.

Sweden has become globally renowned for its delicious meatballs. They are traditionally served in a brown sauce, with mashed potato and lingonberry jam on the side.

Today, Swedes pride themselves on eating as naturally as possible in a bid to look after their health – and that of the planet. Food production ethics and animal welfare are high on the agenda. Hence, there’s an increasing demand for locally made, organic produce and many supermarkets have also started stocking products from nearby farms.

The farm-to-table movement is also very popular in Sweden. And given the generosity of the country’s natural pantry of berries, mushrooms and edible plants, you could even call this local dining approach “forest-to-table”. Restaurant Äng by Ästad Vineyard, located in the west coast province of Halland, is the epitome of this movement. Its fine-dining tasting menus are prepared with ingredients sourced from nearby forests, meadows, lakes and farms. Äng was rewarded with one Michelin star in 2021.

Sustainable gardening at the Koster islands. Kosters Trädgårdar is a restaurant, farm shop and organic garden where you can taste truly local food and learn more about how to live sustainably. A large amount of Swedish restaurants are increasing the amount of locally produced and green dishes on their menu in order to become more environmentally friendly.

Zero waste will shape the Swedish kitchens of the future

As the climate crisis deepens, many people are striving for more sustainable dietary habits with zero waste.

Gram in Malmö was Sweden’s first package-free grocery store, where you bring your own reusable containers to fill with their assortment of local and international products.

In Stockholm, chef Paul Svensson is helping lead the charge to create a sustainable restaurant culture, with his restaurant ‘Fotografiska’. His menu features plant-based items using seasonal produce, with the option to add a meat-based side dish. Mussel shells are ground to make plates and old wine bottles are sent to artisans to make glasses and vases. Organic waste is composted or even used in the signature dish “compost-baked onion”. 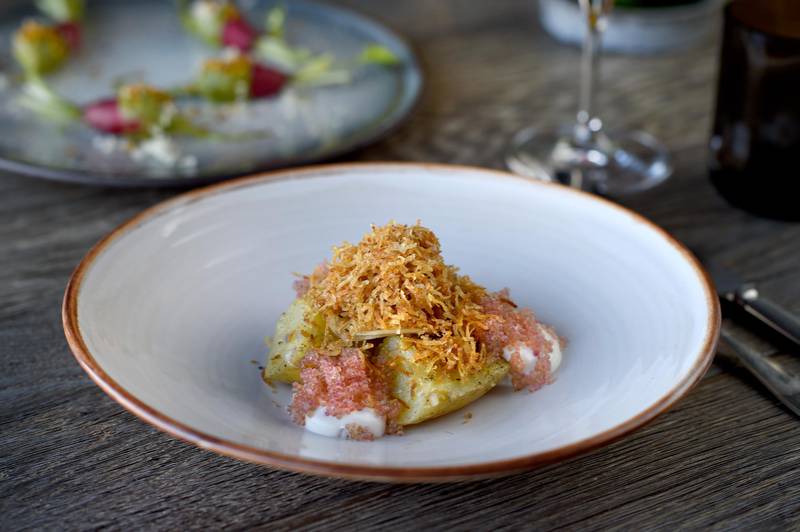 The Fotografiska restaurant was awarded Museum Restaurant of the Year in 2017. It has a sustainable approach, meaning that they serve local food and fully utilise all ingredients. Photo: Anna Hållams/imagebank.sweden.se

But this zero-waste philosophy isn’t a new phenomenon. The Swedish classic pyttipanna is a one skillet fry-up that uses leftover food such as meat, potato, onion and whatever else might be hiding in the fridge.

Sweden’s food culture utilises everything this vast country has to offer, marrying local produce with international influences to create dishes that adapt and evolve along with the culture itself. Innovation and sustainability continue to drive the national food scene forward, while homage is always paid to the traditional ingredients and preparations that form this country’s rich culinary heritage.

Time for 'surströmming' – the fermented herring that Swedes love

Sweden - rich in its history, confident in its future