Located on the west coast of Sweden, Gothenburg has a city pulse with nature on its doorstep. It’s known for its friendly locals, and no wonder – living in such a characterful town right by the sea would make anyone cheerful and welcoming.

Gothenburg was founded in 1621 by King Gustav II Adolf and established itself as an important commercial fishing hub. Though the city has modernised over the centuries to focus on other industries – it’s the birthplace of Volvo cars and home to the Volvo Museum, for example – its proud fishing heritage remains. There’s no better place to get your hands on high-quality seafood than on these shores. You’ll be spoilt for choice thanks to its wide array of restaurants – from fine dining establishments to casual eateries, many of which focus on locally sourced fish and seafood.

So what about the Gothenburg weather? Expect four distinct seasons, each with its particular appeal. Enjoying a southern location, Gothenburg’s climate is fairly mild, and the warmth from the Gulf Stream ensures that average temperatures don’t sink below –3°C in February, with July temperatures averaging +21°C.

As a relatively small city packed with all the highlights of a major international destination – culture, shopping, world-class restaurants and stunning nature – Gothenburg is ideal for either a weekend city break or a longer stay as there’s plenty to see and do in and around town.

Gothenburg, or Göteborg, on Sweden’s west coast, is second in population only to the capital, Stockholm. Home of Volvo and two major universities, the city also holds several major cultural and sporting events. The Port of Gothenburg, seen in the background, is Scandinavia’s largest, with over 11,000 vessel calls each year from 140 destinations.

Much of Gothenburg can be experienced on foot, something locals take full advantage of (when they’re not travelling by tram or bike). With cobbled streets lined with independent shops and cafés, Haga is an inspiring neighbourhood to explore. Now located in the city centre, Haga was actually Gothenburg’s first suburb when it was originally planned in the mid 17th century. Keep an eye out for the many well-preserved wooden houses built between 1870 and 1940 as workers’ homes.

Also take the opportunity to stop for a fika – the Swedish custom of enjoying a coffee and a nibble with friends – at the classic Café Husaren on Haga Nygata (the area’s main street). This cosy place serves up one of the most famous pastries in town – a dinner plate-sized cinnamon bun known as ‘Hagabullen’. Enjoy some post-fika exercise by climbing Risåsberget hill, with the Skansen Kronan fortification at the top, to take in sweeping views across the city.

Another favourite destination with locals and visitors alike is Slottsskogen park – a sprawling haven of greenery combining cultivated parkland and natural forest. In summer, azaleas come into bloom, adding a burst of colour. Slottsskogen is also known for hosting all manner of events – the music festival Way Out West being an annual August highlight.

Approaching its 100th anniversary, the legendary amusement park Liseberg first swung open its gates in 1923. It's known for its rollercoasters but offers a thrilling range of rides for the whole family. The amusement park also features a summer concert series, Live Liseberg, attracting top musicians from Sweden and abroad. Stars such as Gwen Stefani, Snoop Dogg, the Rolling Stones and of course ABBA have taken the stage in previous years.

Skansen Kronan is a fortress situated on the hill Risåsberget in the Haga district. It was designed by Erik Dahlberg and completed in 1697.

Spend the day in the archipelago

The beautiful Bohuslän archipelago – made up of over 8,000 islands, islets and skerries – makes for an ideal day trip. During summer, locals descend on the cliffs of these rocky islands, which serve as perfect sundecks and picnic spots. Active adventurers can enjoy long bike rides, idyllic walks, guided fishing trips or a refreshing swim in the sea.

Known as “black gold”, the lobster found in the waters of the west coast is considered some of the best in the world. Fiskahummer.nu is a well-established lobster safari organiser that also offers oyster, crayfish, mussel and crab fishing adventures. The harvesting season kicks off the first Monday after the 20th of September.

Much of the seasonal, organic produce served up at Gothenburg’s diverse line-up of restaurants is harvested from the nearby sea and land. Fish and seafood lovers have plenty of quality food to choose from, but options cater to meat-eaters, vegans and everyone in between.

A top choice is Fiskekrogen – a well-established fine dining restaurant known and loved for its shellfish platters.

Natur is another one of Gothenburg’s prime dining options. Offering set three-course menus or the option to order from the a la carte menu, all food is prepared using seasonal produce and ingredients.

A little further afield in the county of Halland – a couple of hour’s drive from Gothenburg – awaits an experience quite like no other. Stedsans in the Woods is an off-grid retreat offering accommodation as well as the chance to feast on dishes prepared using seasonal produce sourced on the spot in the woods or via local farms and food producers located within an hour’s drive. Guests are even invited to take part in the foraging themselves, learning about Mother Nature’s pantry in the process. 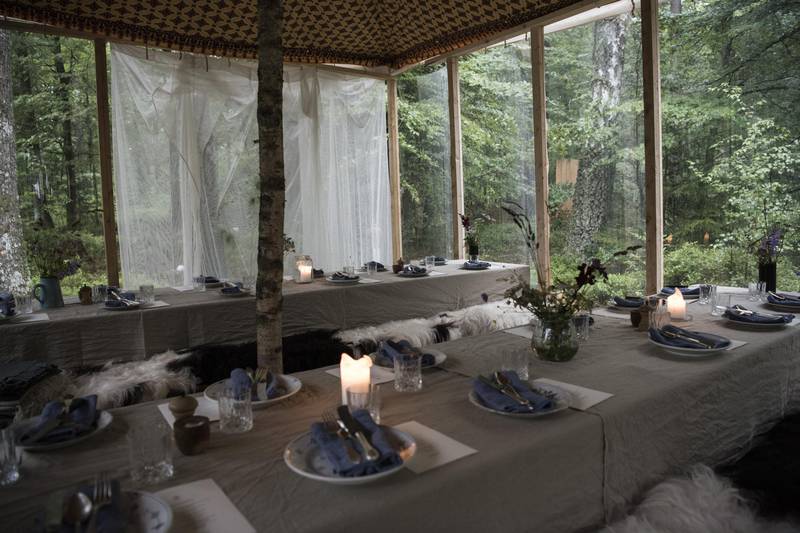 The restaurant at Stedsans in the Woods, offers a truly sustainable and luxurious connection with the nature. Photo: Inge Skovdal

Practical information before your trip to Gothenburg

Trains to Gothenburg are operated by SJ, Västtrafik , MTR and Öresundståget, while bus services are run by companies including Flixbus and Vy Buss.

Landvetter (GOT) is Gothenburg’s international airport, reachable by the shuttle bus service Flygbussarna – the journey takes around 30 minutes.

If you’re travelling by car, the major Swedish motorway E6 will take you from the southernmost parts of Sweden to Gothenburg (it also continues north along the west coast).

You can also use an online travel agency like Omio, RailEurope, Interrail or Eurail among others for travelling here.

Gothenburg is easily accessible on foot or bike. It also has an excellent tram and bus network, and the public transport system includes the ferries that run to and from the archipelago. You'll reach the car-free southern islands by ferry from Saltholmen or Stenpiren Travel Centre. To get to the northern islands, take the ferry from Lilla Varholmen on Hisingen.

There are hotels for every taste and budget in Gothenburg. Five-star Upper House – perched atop Gothia Towers – encompasses a luxury hotel and spa. Rooms and suites are designed in a refined Scandinavian style, and the hotel also houses a restaurant – Upper House Dining.

Clarion Hotel Post, located near the central station, also has plenty of character. Set within an old postal office, its rooms are stylishly contemporary.

Gothenburg offers a host of museums and attractions. The notable Gothenburg Museum of Art boasts Nordic collections dating from the 15th century. Gothenburg Botanical Garden is another must-see – over 16,000 species of plants thrive here.

And fashionistas and fans of Swedish design will enjoy some retail therapy in the trendy neighbourhood surrounding Magasinsgatan. To get to the heart of the action, visit Avenyn, the city’s ‘main street’ that serves as a hub of activity – from shopping to dining, theatre to nightlife.

At the top of the street, you’ll find Götaplatsen, marked by a statue of Poseidon, who is the symbol for this seaside city. This iconic plaza is home to Gothenburg Museum of Art, City Theatre and Concert Hall.

The popular Slottsskogen park is Gothenburg’s biggest green space, surrounded by playgrounds and cafés. Within the park itself, you’ll find a free-to-enter petting zoo in which elks, Gotland ponies and Gute sheep live – along with many other types of animals.

Head to Gothenburg Natural History Museum to witness the world’s only mounted blue whale along with other animals from Sweden and abroad.

Liseberg amusement park is a kid’s dream destination with rides and experiences developed for kids of all ages – Rabbit Land often a particular favourite among the youngest members of the family.

Gothenburg is considered one of the world’s top craft beer hubs, counting numerous names to its growing list of breweries. The city even hosts one of the world’s biggest beer and whisky festivals every spring – GBG Beer Week –inviting you to take part in workshops, tastings and beer launches. 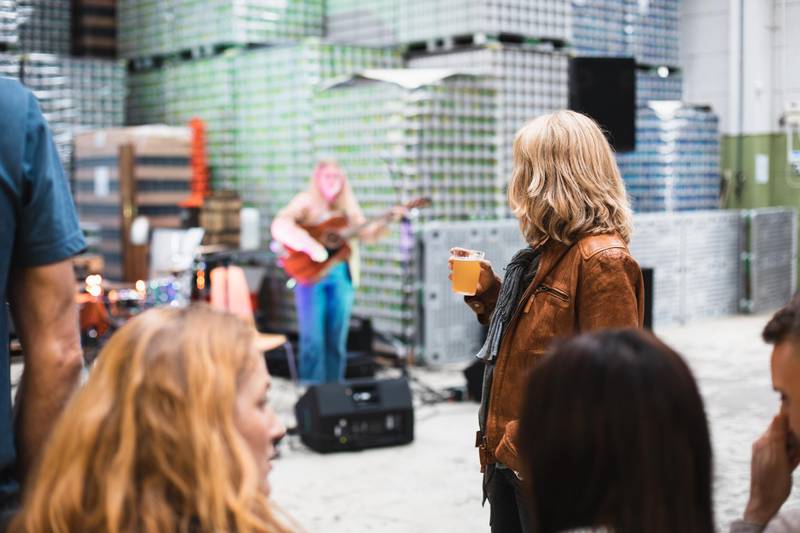 The buoyant beer scene has solid foundations dating back to the mid 17th century. Named after one of the first brewers on these western shores, Johan Casparsson Poppelman, Poppels brewery is one of Gothenburg’s most popular breweries with a wide array of beers, all of which are organic. Dugges, meanwhile, is one of the city’s first micro-breweries. Other notable micro-breweries to look out for are Electric Nurse and Beerbliotek. 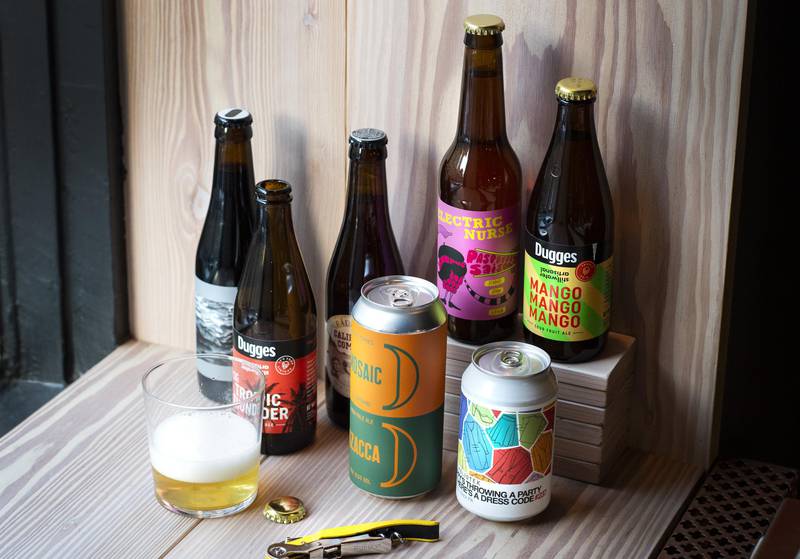 With Gothenburg as your base, you’re in for a varied adventure involving characterful city life – complete with unique dining and craft beer experiences – all within striking distance to magnificent nature and the sea.

Top things to do in Gothenburg

The Sauna in Frihamnen, Gothenburg

Things to do in Gothenburg

See Gothenburg by tram and boat

City break in and around Gothenburg

Discover the best of Swedish architecture

Where to find the best of Swedish interior design

Island walks in the archipelago

Bouldering in the archipelago of Gothenburg

The Sauna in Frihamnen, Gothenburg

The gardens of Sweden – a botanist’s dream

Kayak or SUP along the river Säveån

Kayaking and canoe adventures in Sweden

The Röhsska Museum in Gothenburg

Three historical museums for lovers of classic and modern art, design and furniture

The chefs leading the revolution in modern Swedish cuisine

Sweden has cafés for everyone – hipsters, nostalgics and foodies

Make the most of your family’s weekend break in Gothenburg

Shop on the hop

On the road between Gothenburg and Stockholm – a cultural adventure