Nature plays a large role in the Swedish lifestyle. No matter where you are in Sweden, pristine green spaces are never far away. So, it’s not surprising that in 1909, it was the first country in Europe to establish a system of national parks. Nine parks were designated in that first year alone. Currently, Sweden has 30 national parks, all of which are open to the public free of charge. Many feature a Naturum visitors’ centre, with information about the park’s history and nature as well as guided walks and exhibitions, to help you get the most out of your visit.

In the far north of Sweden, you’ll find the region known as Laponia. A UNESCO World Heritage Site, Laponia is home to four Swedish national parks with snow-covered mountains, valleys rich in vegetation and unique wildlife. One of the most popular is Abisko National Park. Snowshoeing, dog sledding, and the chance to learn about the reindeer-herding culture of the indigenous Sami people make Abisko the perfect place to experience the magic of arctic Sweden. Located 200 km above the arctic circle, this is arguably one of the best places in the world to see the Northern Lights. Reaching the natural park is easy from nearby Kiruna, taking just over an hour by car or bus.

Sarek, Padjelanta and Stora Sjöfallet national parks form a triangle near the Norwegian border some 100 km south of Abisko. Sarek is one of Sweden’s most inaccessible national parks, only reachable by foot or on skis. However, the scenic journey is worthwhile, allowing you to explore one of Europe’s last true wilderness areas. Keep an eye out for wildlife such as elk, lynx, wolverine and the endangered Arctic fox. Padjelanta is Sweden’s largest national park, covering almost 2,000 km². It offers unforgettable views of the Sarek mountains and fields covered in wildflowers once the winter frost thaws. And Stora Sjöfallet (also known as Stuor Muorkke) is home to the Akka massif, a ruggedly beautiful mountain range known as ‘The Queen of Lapland’.

While these parks offer some of Scandinavia’s most stunning winter scenery, they are worthy of a visit all year round, with the midnight sun shining 24 hours a day during the height of summer.

Sandy beaches and paradise islands in the southern parts of Sweden

In stark contrast to the northern national parks, further south you’ll find parks featuring white sand beaches and islands brimming with unique flora and fauna. Stenshuvud National Park on the south eastern tip of Sweden allows for both picturesque woodland hikes and relaxing days on the beach. Hills covered in dense forest roll gently towards the sea, met by a golden sand beach that is overlooked by several viewpoints along the trails.

Beach lovers won’t want to miss a trip to Gotska Sandön National Park, a small island located north of Gotland, Sweden’s largest island east of the Swedish mainland. It’s uninhabited, except for the colony of grey seals that you’ll find basking on one of the many sandy beaches. Between the end of May and beginning of September, you can reach Gotska Sandön by ferry from Nynäshamn just south of the capital of Stockholm or from Fårösund on Gotland.

Sweden’s first marine national park, Kosterhavet, provides an idyllic setting for divers and snorkelers alike, with coral reefs and marine life that can’t be found elsewhere in Sweden. Biking and hiking are also popular activities. This small cluster of islands can be reached by ferry from the town of Strömstad, north of Gothenburg. There are plenty of restaurants on the islands, where you can sample the fresh prawns and lobsters the region is renowned for.

Gotska Sandön National Park, is a solitary island and part of Gotland county.

If you want to mix a little time outdoors with a trip to Stockholm, Tyresta National Park is a mere 20 km south of the city centre, just an hour away by public transport. The park spreads over almost 20 km², and has a 30-kilometre perimeter of surrounding nature reserve, with pristine primaeval forests and coniferous woodland housing up to 8,000 animal species. Stockholm’s archipelago also boasts a national park, Ängsö. Ängsö is a treat in spring and early summer when vibrant wildflowers dot the bright green meadows. There are ferries from Stockholm to Ängsö. 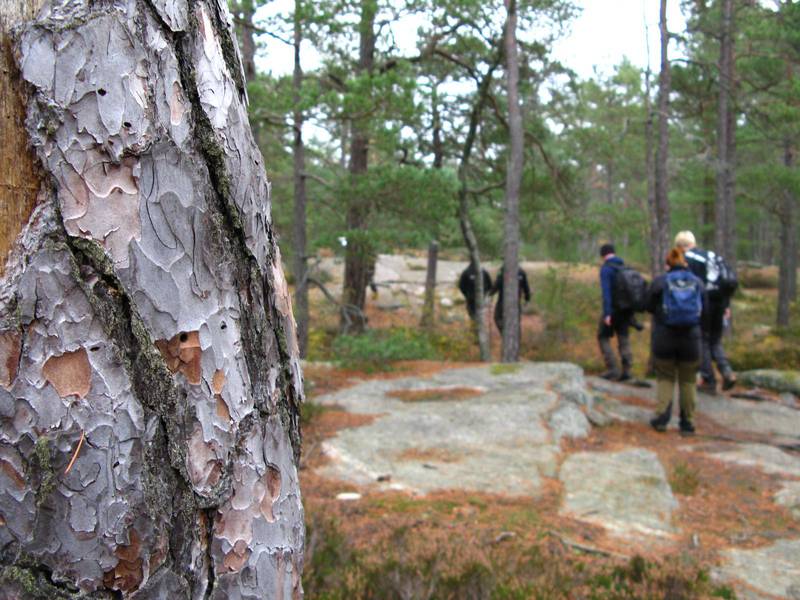 Tyresta National Park and nature reserve is one of the largest untouched primeval forests south of the mountainous region in Sweden. Photo: tyresta.se

Refreshing summer dips in the lake, autumn strolls in the forest, cross-country skiing during winter and wildflower meadows welcoming the arrival of spring, a visit to Sweden’s coniferous natural parks is beyond worth your while any time of the year. Tiveden National Park, halfway between Stockholm and Gothenburg, consists of pristine virgin forests, with giant boulders from the ice age, jutting up to 10 metres into the sky. Also breaking up the terrain are dozens of lakes and rivers perfect for fishing and canoeing, and even some exciting caves to explore.

Thirty kilometres northeast of Malmö lies Dalby Söderskog, the smallest of the Swedish national parks. It’s a perfect green oasis all year round and a prime example of the beautiful old-growth forests in Sweden.

While Sweden’s national parks are open to everyone, it is important to follow the park rules in order to protect the biodiversity in these fragile natural environments.

Hiking on the boardwalk of Fulufjällets National Park, Dalarna, with views of a waterfall.

All the parks can be found on the site Nationalparksofsweden.se

Wilderness adventure in Laponia, in the Swedish Lapland