Stockholm has a fantastic public transportation network covering almost every nook and cranny of the capital on sea, land and below ground. Join the locals and discover the city using boats, buses and the metro.
Last updated 30 November 2020
SL, Stockholm Public Transport

In a city built on 14 islands, getting around by boat is a given. SL, Stockholm’s Public Transport, runs several boats which are included in the route network and accessible with the same ticket as buses and the underground.

Line 80 is perfect for sightseeing. It traffics between Nybroplan and Frihamnen via Allmänna gränd and Nacka Strand, among other stops. There are several interesting places to visit along the route. Hop off at Allmänna gränd to explore Djurgården, a National City Park. Here, you can roam in unspoiled nature, enjoy lunch or coffee or visit one of the many attractions. The Vasa Museum, Gröna Lund, the Abba museum, the Viking museum, Skansen and Liljevalchs art gallery are all just a short walk from the boat stop. When the boat passes Nacka Strand, you can get off and have brunch, lunch or dinner at Restaurant J with a fantastic terrace by the water. Don’t miss the spectacular statue by Carl Milles, a 24-meter fountain at the inlet to Stockholm from the Baltic Sea.

Line 89 is great for those wanting to take a cruise on Lake Mälaren. Start at Klara Mälarstrand on Kungsholmen, sail towards the island of Ekerö, get a cup of coffee and enjoy the views.

Taking the bus is a classic and enjoyable way of seeing a city. In Stockholm, the blue busses numbered 1, 2, 3, and 4 work especially well. They drive across the city from north to south and east to west, passing many classic sights and other attractions along the way.

Stockholm’s tunnelbana, as the metro is called in Swedish, is by far the fastest way of getting around the city. The possibilities for sightseeing are endless as the system covers not only the inner city but also the outskirts.

But the metro is also a sight in itself. The 110-kilometer long metro system houses a unique collection of sculptures, artworks and exhibitions. More than 90 or the 100 stations are decorated by artists. The art program was initiated in the 1950s, and the oldest works can be found at the Stockholm Central station, 'T-Centralen' (or 'Centralen' for short) station.

Since then, the collection of art has grown for every decade thanks to the municipality’s so-called two percent rule, which states that up to two percent of the cost of publicly funded construction projects is earmarked for art.

Useful map for getting around

The page tunnelbanakarta.se is a subway /metro map that lets you see upcoming departures for the station when you click on it.

Take a free tour of the art

Free guided art walks in English are available from June to August every Tuesday, Thursday and Saturday at 3 pm, starting from the SL Customer Centre at T-Centralen.

During the rest of the year, you can naturally enjoy the art on your own – all you need is a valid ticket for the metro. Some of the most interesting stations include T-Centralen, Solna Strand, Mörby Centrum and Hötorget. 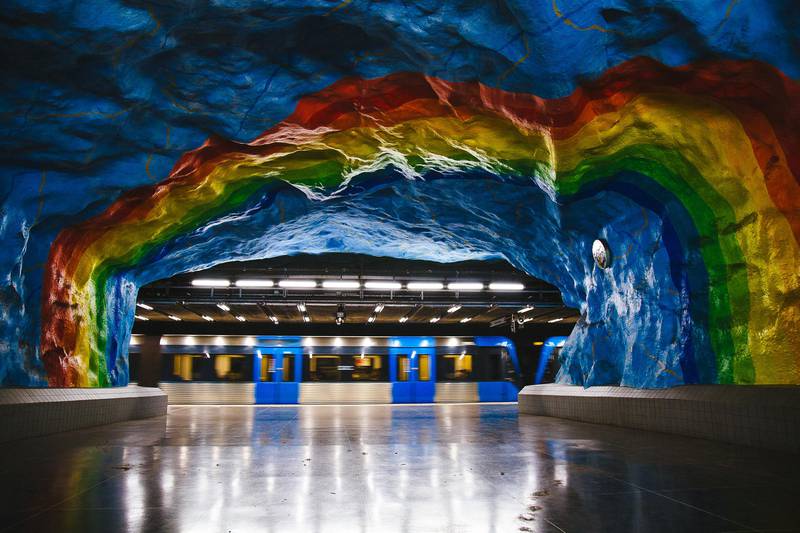 Many of the subway stations of Stockholm are filled with art, you can take a guided tour to explore it. Photo: Agence Les Conteurs

In addition to the metro, Stockholm’s public transportation network includes other railways.

Commuter trains allow you to travel quickly over longer distances, from the north and south across the city. The system is made up of four lines and 53 stations, from Nynäshamn and Gnesta in the south to Bålsta and Uppsala in the north. Uppsala, for instance, is a perfect day trip from Stockholm. The city boasts the oldest Gothic cathedral in the Nordic region, charming old cafés and great shopping such as the fashionable mini department store Rådhuset.

Five local railways – Tvärbanan, Nockebybanan, Saltsjöbanan, Roslagsbanan and Lidingöbanan – also connect travelers from Danderyd, Täby, Vallentuna, Österåker, Bromma, Saltsjöbaden and Lidingö with the metro network. Do take time to explore where they can take you. One tip is the beautiful, wooden bathing house from 1913 in Saltsjöbaden. In the summer, you can swim in the sea from piers in the house, spend a sunny day on the small sandy beach and lunch in the outdoor restaurant.

In recent years, Stockholm has also invested in trams. Tram number 7 is the perfect sightseeing line, taking you from T-Centralen across Djurgården all the way to Waldermarsudde, where you’ll find one of Stockholm’s most beloved museums: Prince Eugen’s Waldemarsudde. It showcases the prince’s art along with works from his collection of Swedish art, including works by icons such as Anders Zorn and Bruno Liljefors.

Tickets for Stockholm’s public transportation system can be purchased at;

Note that it's not possible to pay cash for tickets on board buses.

The best thing to do is to buy an SL Access card, an electronic smart card which nearly all tickets are loaded on. The card itself costs 20 SEK and you can re-use it on future visits to Stockholm. You can load the card with money for single tickets or a 24 hour-, 72 hour- or 30-day ticket. A single ticket is valid for 75 minutes on all buses, metro lines and commuter ferries. Once on board, you place your card on the card reader and the fee is automatically drawn.

The tickets for the commuter ferries are bought at the same place as the tickets for all buses and metro lines and is valid for 75 minutes.

You can find all the timetables at sl.se

There are three different stations clustered in the city centre.

Cityterminalen - the hub for bus transportation with departures to practically every large city as well as hundreds of smaller town.

Stockholm Central Station - the hub for railroad-traffic. It actually has the most traffic of all the rail road stations in the Nordics and have 222 000 visitors at the station daily.

T-Centralen (Central Metro Station) is where all of the Stockholm metro lines meet, but of course there is more transfer stations where lines cross or diverge.

Travelling by boat in Stockholm

Stockholm is built upon 14 islands, and you can go by boat between the islands with a public transport ticket.

Travelling by boat in Stockholm

SL, Stockholm Public Transport
Give us your feedback!