The 19th century stone cities are fascinating reminders of the urban expansion and social transformation ushered in by industrialism. You’ll find these must-see townscapes across Sweden, from Sundsvall in the north to Malmö in the south.
Last updated 19 November 2020
GothenburgSecond largest city in Sweden and located on the west coast, Gothenburg is known for its world-class seafood, city canals and vast coastline.MalmöSouth Sweden's largest city and third largest in the country, Malmö has city beaches, a rich and exciting food culture and so many green areas that its known as the "City of Parks".SundsvallSundsvall is a gem on the east coast of Sweden and has everything you could wish for, whether you're an urban type or more of a nature lover.

This architectural movement began in Europe; the urban landscapes of cities such as Paris, Vienna and Berlin – all established from the mid to the third quarter of the 19th century – inspired the Swedish stone city. Industrial hubs with enough money to transform their townscapes demolished the majority of low-rise buildings and timber houses to give way for new neighbourhoods made of stone.

Prominent city planner Albert Lindhagen was a central stone city figure – he drafted the plan for Stockholm in 1866 and was involved in a similar project in Malmö (Rörsjöstaden) in 1872.

The Swedish stone city in a nutshell

The type of historic building you’ll come across when exploring Sweden’s stone cities may vary stylistically, but most are elegantly designed in National Romantic, Nordic Classicism, Renaissance Revival and a stricter Art Nouveau style.

Construction-wise, stone city houses are defined by their multi-storey (often four levels) brick and stone profile, built to house several families or individual workers. Positioned close to one another in a grid-like street system, many houses feature inner courtyards.

The town planning structure drew on a classicist ideal, which aside from its all-important grid system and rectangular blocks, incorporated boulevards and avenues put in place to allow for increased traffic.

The number of public and commercial buildings such as banks, schools, hotels, hospitals and factories increased due to the urban growth and social transition of this period.

Originally, stone cities were found mainly in town centres, but by the beginning of the 20th century, they started spreading to the city-borders and suburbs, with close proximity to factories and industrial sites. Architecturally, they looked like inner city replicas.

These distinctive neighbourhoods remain an important part of Swedish architecture. You’ll find stone cities in and around destinations including Stockholm, Gothenburg, Malmö, Norrköping, Helsingborg and Sundsvall. Here’s an introduction to some of the most notable ones.

Norrköping in central Sweden is one of few cities that still have up-and-running trams. Norrköping is Sweden’s tenth largest city seen to population. It used to be a major industrial city with focus on textile production but has in recent decades been transformed into a centre for culture and academia.

Stone cities of Stockholm and its surroundings

Located a little south of central Stockholm, Midsommarkransen is one of Sweden’s best-known stone cities. Construction of this elegant, ochre-hued neighbourhood started in 1905 to house workers of AB Tellus brick factory. Albin Brag is the architect behind it, and his style was often described as “strict Art Nouveau” due to his favouring of balanced lines and craft-based detail. Upon a visit, you’ll note the beauty of the granite house foundations, with their rough-cut blocks of stones in varying natural shades, and the decoratively carved front doors. Several feature bay windows that add to the beauty of the houses.

The local school – now housing office workers– is a historic public building to look out for. Built in 1915 by architect Georg A. Nilsson, its ornate wrought iron clock is a defining feature.

Midsommarkransen’s architect Albin Brag also created another stone city in the nearby area of Aspudden. Mariehäll, a stone city built near Ulvsunda industrial area by what is now Stockholm Bromma Airport, is also worth exploring. 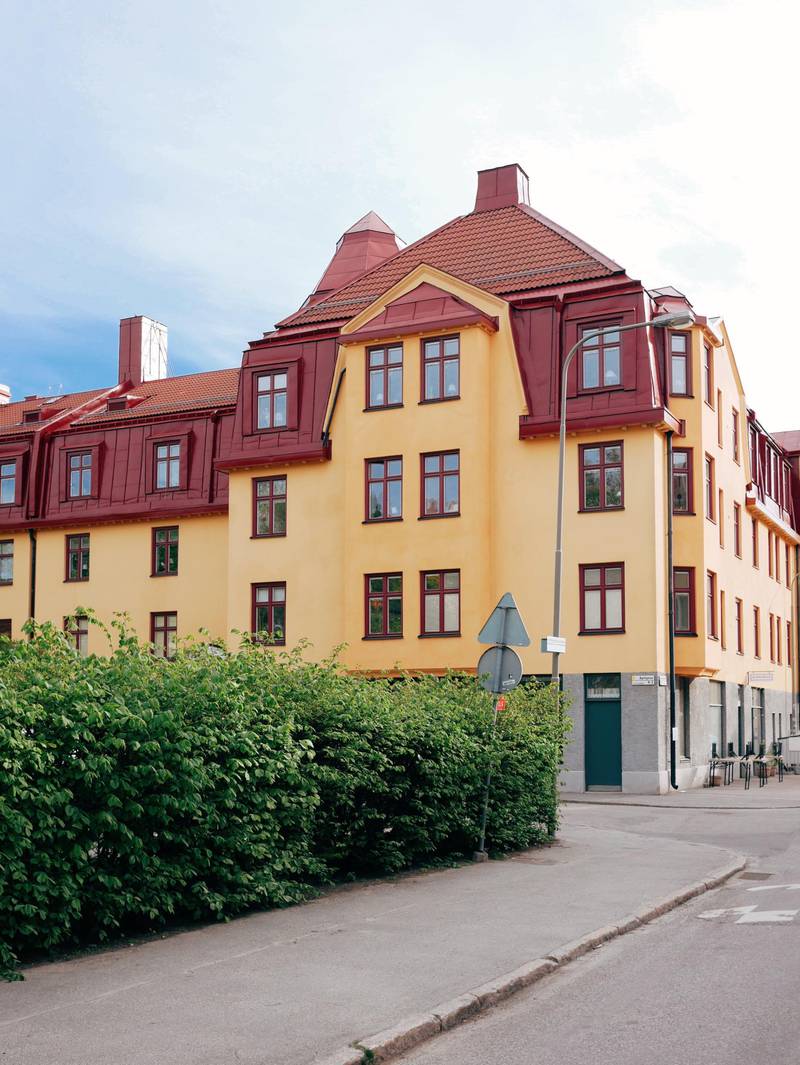 Midsommarkransen, a suburb to Stockholm, was built in the early years of the 20th century. Photo: Rosanna Andersson / Visit Stockholm

A shallow lake was dug out to give rise to Rörsjöstaden – Malmö’s stone city. Construction began in the 1870s, using a draft by city planner Georg Gustafsson, who drew on the plans of his Parisian peer Georges-Eugène Haussmann. Built around Kungsgatan, a wide boulevard with the spectacular St. Paul's church as its crowning glory, there was a sense of drama in this urban landscape. Kungsgatan has since been divided into several individual sections, but the distinctive yellow brick church is still standing.

Continuing the historic building hunt, you’ll find the oldest houses – dating from the 1870s – on the three streets Löjtnantsgatan, Kommendörsgatan and Kornettsgatan. Aside from the great mix of residential buildings, keep an eye out for the beautiful school Pauliskolan.

The grand Stone City of Sundsvall

Wander the streets and take in the beauty of the area – from residential houses and banks to churches and hotels. If you’re curious about the historic life behind these facades you can join a guided city tour. You’ll hear stories about the servants and gentry living in Stone City , offering a further glimpse into the past of one of Sweden’s best preserved late 19th century townscapes.

You don’t need to be an architecture enthusiast to appreciate the beauty of these unique urban and suburban areas. A visit to one of Sweden’s stone cities is a worthwhile experience for anyone exploring the cityscapes of this intriguing Nordic land.

The Stone City in Sundsvall

The Stone City (Stenstaden) in Sundsvall.

The magnificent Stone City of Sundsvall

GothenburgSecond largest city in Sweden and located on the west coast, Gothenburg is known for its world-class seafood, city canals and vast coastline.MalmöSouth Sweden's largest city and third largest in the country, Malmö has city beaches, a rich and exciting food culture and so many green areas that its known as the "City of Parks".SundsvallSundsvall is a gem on the east coast of Sweden and has everything you could wish for, whether you're an urban type or more of a nature lover.
Give us your feedback!