Fancy having flowers in your hair, dancing around a pole, singing songs about little frogs, just like the locals? Why not! A true expert shares her traditional Midsummer experience.
Last updated 22 February 2022

Apart from the Christmas season, midsummer’s eve is probably the biggest celebration in the country as every man, woman and child celebrate the longest day of the year. Midsummer’s eve is celebrated between June 20th and June 25th. Keep these dates in mind, especially if you are in the region of Dalarna in central Sweden. Midsummer 2022 is on 24 June.

Because no one and no place in Sweden celebrates 'Midsommar' (Midsummer) like Dalarna. And if you think of typical images of Sweden: the cute, brightly painted model wooden horses, the red-painted cottage with white gables and people dancing around the Midsummer maypole – they are all from Dalarna.

And so is Frida Wallén, a project manager with Visit Sweden in Stockholm who has travelled and worked all around the world. But, like they say: you can take the girl out of Dalarna, but you cannot take Dalarna out of the girl. And if there were a poster girl for Midsummer, it would probably be Frida.

Frida is from a village named Östansjö in Dalarna, about 30 minutes by car from the city of Falun:

“Every year I receive a text message from the Midsummer coordinator (yes, there is one) in nearby Svärdsjö asking me if I want to be the flag-bearer of the parish flag in the procession. Of course I say yes; celebrating Midsummer with family and friends reconnects me to where I come from and my descendants. And it I love it that everyone gets involved: there’s lunch to be made, coffee, biscuits and buns to be made, flowers to be picked, raffles to be run and it all has to be organised. And with some 5,000 people turning up to celebrate midsummer in the town of Svärdsjö – it’s a big job!”

“Something else I love about midsummer is its symbolism and meaning; for example the folk costume I wear tells you which parish I am from, if I wear a bonnet it means that I am married, and even the flowers that we decorate the garlands with on the maypole must be blue, white and yellow. And on Midsummer’s eve girls go out to the meadows and, in total silence, collect seven different types of flowers and put them under their pillow before they go to bed. And that night they will dream of the man they will marry. So they say.”

It should be mentioned that Frida’s partner Hampus, who comes from Malmö, joins in the celebrations with her and yes, he dons the traditional costume too. Frida wouldn’t have it any other way. 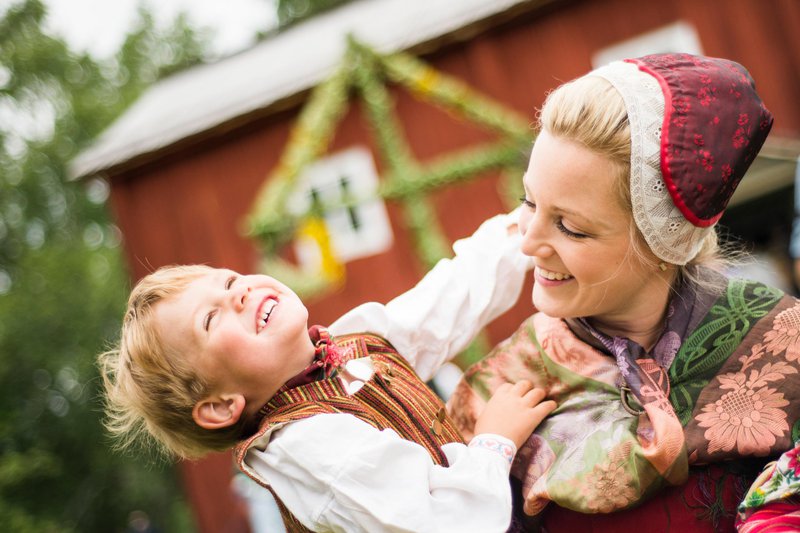 Midsummer is a celebration of summer and light, and is one of the most celebrated holidays in Sweden. Some Swedes turn up to the celebrations in their traditional folk costumes to honour their regions. Photo: Per Bifrost/imagebank.sweden.se

According to Frida, midsummer celebrations are highly organised and run to a strict time schedule in Svärdsjö:

“We pick the flowers and the birch leaves that we decorate the maypole with the evening before Midsummer’s eve, and at 9.00 am the following day we gather to decorate the maypole. The ladies also decorate their hair with flowers before lunch. Lunch is herring and sides, boiled potatoes in dill, baked salmon and moose are prepared and for dessert we always have fresh strawberries with elderflower ice cream. The moose dish is traditional in our family as my dad and I are both licensed hunters, so we know where it comes from. We have beer and local spiced vodka with lunch and each toast is accompanied by a song. My advice to people is not to do ‘down in ones’ as some of the drinking songs suggest because it is a long day and you should pace yourself! When the long lunch is over a procession of the people involved in the arrangements heads off to raise the maypole at around 5.30pm. Then the party really gets started with dancing, games and singing – all accompanied by local musicians playing traditional music.”

Where to celebrate midsummer in Sweden

If you ask Frida you should celebrate midsummer in Dalarna – of course. Other attractions in the region include the fantastic UNESCO world heritage site Falun Copper Mine, and artist Carl Larsson’s house and gardens.

If you are elsewhere in Sweden head for Skansen in Stockholm for example, public parks, gardens, summer cottages of friends, in fact, anywhere in Sweden will do as long as it is outdoors!

Here is a guide to celebrating midsummer in Sweden.

Midsummer takes place in June and is one of the most celebrated holidays in Sweden. A may pole is traditionally created and raised during the day, which people later gather around to dance and sing.

Midsummer in Sweden – a cherished tradition

Region
Dalarna – a miniature Sweden rich in nature and culture

Smoked salmon and Aquavit – How to do midsummer like a Swede

Strawberry cake and the taste of Swedish summer