Småland – as Swedish as it gets

‘Sweden for real’ is the official slogan of the region of Småland in the southeast of Sweden. With a rich culture, pristine nature and a proud culinary tradition – also the birthplace of IKEA and famed children’s book author Astrid Lindgren – Småland is as Swedish as it gets.

A visit to Småland takes you to a region of dense old-growth forests, sparkling lakes, quaint red cottages and vibrant green meadows. It offers the perfect balance between nature and culture, with over 5,000 lakes and rivers, 200 kilometres of coastline, 400 nature reserves and several cities offering world-class dining and cutting-edge arts scenes.

One of the larger provinces in Sweden, Småland is also a hub of innovation and creativity. The Kingdom of Crystal (Glasriket) – a cluster of villages between the cities of Kalmar and Växjö – has been the centre of the country’s world-renowned glassblowing community since 1742. And the small town of Älmhult, on the central southern border of the region, is the site of the first IKEA store, now the IKEA Museum.

Crayfish party at Wallby Säteri in Småland. Crayfish parties are an annual tradition in Sweden where people come together to eat crayfish and to spend time together.

Småland’s cities have a lot to offer

While its small towns and verdant countryside are this region’s claim to fame, Småland’s cities offer the perfect harmony between urban life, outdoor activities and timeless culture – Sweden for real.

Sitting on the southern edge of Lake Vättern – the second largest lake in Sweden – city life, beach vibes and outdoor adventures blend seamlessly in Jönköping, making it the perfect base for exploring the region. The city has a unique collection of museums – such as Tändsticksmuseet (Match Museum) and the Husqvarna Museum, featuring royal weapons, motorcycles and other equipment made by this internationally popular brand (named after a town just east of Jönköping).

For a taste of the coastal life, make your way down to Kalmar on Småland’s southeast coast. This seaside city is awash in history, with its 16th century castle – complete with moat. It also offers several local boutiques, cosy cafés and restaurants. Do your taste buds a favour and book a meal at Postgatan, serving small dishes as well as à la carte based on local ingredients, combining Swedish flavours with an international twist.

You can’t leave Kalmar without popping over to the stunning island of Öland. In the summer you can take a ferry to this popular island, or go by car on the connecting 6 kilometres long bridge. With white sand beaches and endless hiking trails, this is a favourite summertime escape for Swedes from all over the country, including the royal family who has summered here since the 16th century. You’ll find yourself spoilt for choice with the large selection of restaurants on the island.

Växjö is a ‘small metropolis’ nestled away in the heart of Småland. Located a little over an hour by train inland from Kalmar, and 2,5 hours from Copenhagen, Växjö’s culinary scene rivals that of any larger city. Five of its restaurants are featured in the White Guide (Scandinavia’s leading restaurant guide), and the hotel/restaurant PM & Vänner was awarded a Michelin star for its modern take on Småland cuisine. In 2015, Växjö was named Gastronomic Capital of the Year by the Swedish government.

Aerial photo of Jönköping in Småland.

The rooftop bar at PM & Vänner in Växjö, Småland

Welcome to Gränna, the origin of the candy cane

A short half-hour drive up the lake from Jönköping takes you to the sweet little town of Gränna, where one of the world’s most beloved sweets were created. Known in Sweden as ‘polkagris’, you’ll instantly recognize these red and white striped peppermint candies. It was back in 1859 that single mother Amalia Erikson whipped up the first batch of these stripy confections. The first versions took the shape of peppermint rocks, but later took the shape of the banded canes that are now a Christmas staple around the world. If you want to stretch and twist your own minty treat, visit Grenna Polkagriskokeri. All the candy makers offering these workshops can be found at visitsmaland.se. 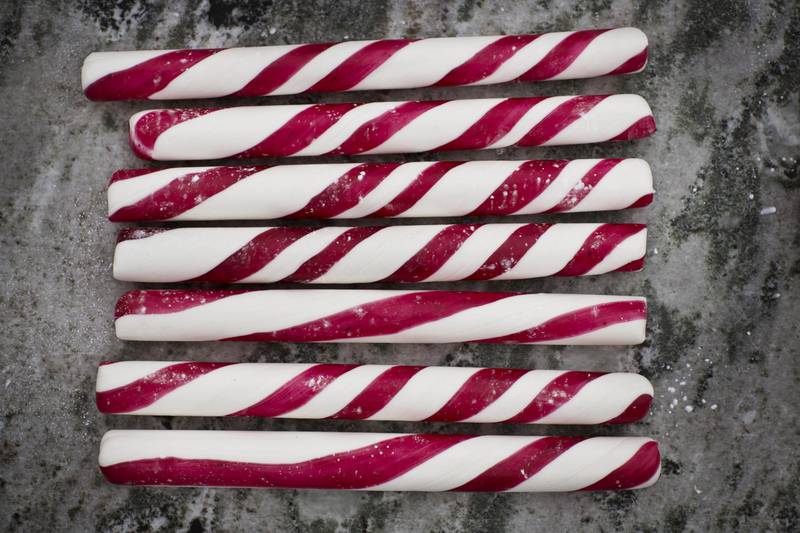 Polkagris is a special candy stick made in Gränna, Småland. Photo: Tina Stafrén/imagebank.sweden.se

A favourite for families, and those who are young at heart, the theme park of Astrid Lindgren’s World in Vimmerby will unleash your childhood fantasies. This is where famed Swedish children’s book author Astrid Lindgren was born, who may be best known for the international classic “Pippi Longstocking”. And here, her books come to life – recreated down to the last detail in this magical world where imaginations can run free. If you’d like to stay the night and explore more of the park and surroundings, Astrid Lindgren’s World offers self-catering accommodation – from camping to cottages.

Scene from Emil i Lönneberga at Astrid Lindgren's World

Practical information before your trip to Småland

Jönköping is easily reached by train from Stockholm or Gothenburg.

Kalmar can be reached by either train from Stockholm (4.5 hours), Gothenburg (4 hours) and Copenhagen (4 hours) – passing through Växjö on the way.

There are also daily direct flights from Stockholm.

For travel information for trains, please visit www.sj.se and www.oresundstag.se

There are gems hidden throughout the Småland countryside, so one of the best ways to discover them is by car. Many car hire companies offer electric or hybrid options that let you minimize your carbon footprint and save on petrol. Hiking and cycling are also great ways to explore the picturesque landscape, letting you visit small villages and meet friendly locals along the way.

Local buses run from the larger cities to most of the towns and villages in the region.

Larger cities offer everything from luxury hotels to charming bed and breakfasts. But for the true Småland experience, rent a cottage and enjoy a taste of laid-back country living. Isaberg Mountain Resort is the perfect all-in-one accommodation, offering various types of lodging, mountain biking, skiing and miniature golf, with several eateries on the premises.

For something a little more unique, you can stay at The Pavilion, a secluded wooden house on a tiny private island that can only be reached by canoe, or sleep in grandeur in Teleborgs Castle in Växjö. You can even spend the night in a converted prison at Hotell Fängelset in the coastal town of Västervik.

There are seemingly endless outdoor activities. With thousands of lakes and hundreds of kilometres of coastline, the chance to go kayaking or canoeing is never far off. And below the water’s surface off the coast of Kalmar and Västervik lie several wrecks, making them popular destinations for divers. Hiking and cycling are also ideal ways to get out and explore the Swedish nature. For an adrenaline-pumping adventure, take to the treetops at Little Rock Lake Zipline, the longest in Europe.

Småland is the perfect destination for a family holiday. While there is no playground like the great outdoors, and there’s plenty of nature to keep your little ones occupied, there are also a number of activities geared at family fun, like the wild west theme park High Chaparral. You can also take the kids to Astrid Lindgren’s World in Vimmerby or to Sagomuseet in Ljungby (Land of Legends) to learn about local folklore and embark on a geocaching treasure hunt.

Explore the region of Småland in southern Sweden

Hot air balloon
A hot air balloon ride over the lush forests of Småland. The rural parts of Småland are vivid, with a rich wildlife and numerous historical sites and villages to visit.
Photo: Patrik Svedberg/imagebank.sweden.se

There’s a stretch of forest between Gränna and Husqvarna so beautiful it served as a muse to famed Jönköping painter John Bauer, known for his landscape and nature paintings with gnomes, trolls and other mythological creatures from Swedish folklore. The 50 km hiking trail, known as John Bauerleden (John Bauer Trail), takes you through lush green meadows, deep forests, stunning coastal walks and charming villages. Thanks to Sweden’s Right of Public Access, you can camp almost anywhere you please along the way.

If you’re up for a longer adventure, strap on your hiking boots and embark on the 160 km Ostkustleden, which snakes through old-growth forests, past tranquil lakes and along the coastline. Lilla Hycklinge, one hour up the coast from Kalmar, is the most popular starting point for this circular route. Every 20 km, you’ll find a cabin, open year-round, to recharge your batteries before hitting the trail again the following day.

Hiking in the forest

Hiking on the John Bauer trail in the dense forests of Småland. The trail is 46 kilometers long and there are several sights along the way, such as historical homesteads, remnants of an old monastery, a historical village and a mountain with beautiful views over the surrounding nature. There are numerous picturesque hiking trails all over Sweden.

From foraging to fine-dining, Småland is a foodie’s playground

In addition to upscale dining experiences like Växjö’s PM & Vänner and inventive local eateries sprinkled across the region, Småland’s forests offer a cornucopia of fresh ingredients waiting to be plucked and prepared for a foraged feast. A visit to one of Småland’s Edible Country tables is the perfect way to experience nature and prepare your findings. Read more about the Edible Country.

In keeping with its claim of offering ‘Sweden for real’, Småland is home to some of the country’s most iconic dishes. ‘Ostkaka’ translates directly to ‘cheese cake’ and traditionally, rennet is added to a milk and flour mixture giving the cake a soft, curdy texture. (The rennet can be exchanged for microbial or vegetable enzymes). Ostkaka is not as sweet as American-style cheesecake but has a slightly sugary, almondy taste perfectly complemented by some jam and a dollop of whipped cream.

‘Isterband’, a pork sausage with a slightly tangy bite, is another Swedish classic with Småland roots and typically served with dill stewed potatoes, pickled beetroots and sometimes with lingonberry jam. And if you’ve eaten a serving of Swedish meatballs, you are well-familiar with the tart red lingonberry. Småland loves its lingon, which can be found in the forests between August and September. Lingonberry jam is a favourite accompaniment for meat dishes across Sweden.

Eating in a forest in Småland, Edible Country

‘The Edible Country’ is a do-it-yourself gourmet restaurant where the visitors forage and cook their own food in Swedish nature.

Eating in a forest in Småland, Edible Country

Things to do in Småland

The countryside of Småland offers a variation and variety of outdoor pursuits and activities, for example hiking trails that include the Store Mosse National Park and Isaberg, a beautiful forest and lake area between the towns of Jönköping and Halmstad. Bundles of activities are on offer such as cycling, canoeing, horse-riding and fishing. Or rent a cabin for a couple of weeks and let the kids do the activities.

Things to do in SmålandRead more

Glasriket – a wonderland of glass

Sweden has cafés for everyone – hipsters, nostalgics and foodies

Things to do in Småland

Where to find the best of Swedish interior design

Kayaking and canoe adventures in Sweden

Three historical museums for lovers of classic and modern art, design and furniture

The gardens of Sweden – a botanist’s dream